What makes sense with transportation?

What makes sense with transportation?

I thought we would start today by trying to find common ground when talking about cars.

On the one side, there are the advocates of sustainable design.  Many in the

sustainability world stress the importance of mass transit, bicycles, walking, and car pooling.  It seems to me that many of those folks might live in older cities that sprang up around railroads and street cars. They have wonderful, old parks, like Central Park, that are well-suited for bicycles.  People live in high-rise apartments, creating high-density areas well-suited for mass transit.  I grew up in such a city in Europe (Madrid).  I loved it.

On the other side, living well outside the city with

no mass transit in sight, my sweetheart of a fighter pilot husband loves driving his Jeep SRT.  It is big, powerful, throaty, comfortable, and red.  It may only get 15-18 miles per gallon, but it is a great car for accelerating on freeways.  It can haul a lot of stuff.  It is a fun car.

Current reality: Sprawl.  When the car, Eisenhower’s expressways, air conditioning, and malls combined, sprawl happened.  Suburbia was beautiful, private, and comfortable, but not suited at all to mass transit, bicycles, or walking.  It was suited to cars and individualism.  Like my fighter pilot husband, I enjoyed the fun and freedom – at least, until fuel prices tripled.  Even though prices have come back down, it was a sobering gut check.

So, what to do?  I also had a really fun car before gas prices soared – a Jeep Rubicon, the liveliest car I ever drove, but, like my fighter pilot’s SRT, it also got a meager 15 miles/gal.  When gas prices went up to $4 a gallon, I was spending $600 a month for fuel.  That’s when I bought a Prius.  45-50 miles/gallon.  Still sleek and energetic, when needed, but awesomely practical.  With innovative technology that uses braking to charge the battery, 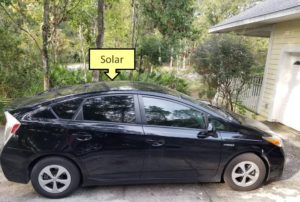 spiffy displays to help me monitor my lead foot, and solar panels on the roof (not so practical, but more on that in another blog post), it was cutting edge.  And, with the seats down, it can haul a boatload of stuff.  I miss my cute Jeep, but I saved over 60% on fuel.  That’s money for church and Rotary donations, dinners and vacations.  It’s well worth it – and I have the added benefit of reducing my environmental impact.  Not perfectly – it still has sustainability issues – but is a good start.

Common ground?  I think I have stumbled on common ground here.  A terrific book called Greening your Business, by Daniel Sitarz, gives a simple 2-step formula for calculating your transportation impact: (1) number of miles you drive per month/your car’s miles per gallon (mpg) = average gallons of fuel/month, and (2) multiply that number by 25 lbs.  If I were to drive my old Jeep every day, I would be contributing 10,000 pounds of CO2 a year, vs. about 2,400 pounds with my Prius.  If you are concerned about greenhouse gases, that’s a huge difference.  If you are not concerned about greenhouse gases, it’s still a fantastic savings.

Let’s be realistic … As a friend of mine used to say, you’ve got to start from where you are and not from where you want to be.  People in the United States are not going to give up their cars unless there is a better option.  I love the trains in Europe, but mass transit is not practical in US southern cities (or in any city with suburban sprawl) where the density does not justify the number of routes and timing needed to lure passengers from their cars.  Waiting in the heat or cold for a bus or train 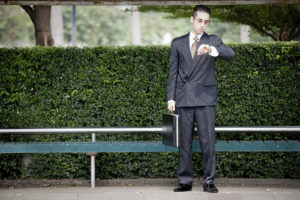 instead of sitting in a comfortable car with music or audiobooks (even if sitting in traffic) is not a compelling idea.  Car pooling is great, if you can find a partner.  Bicycles and walking are wonderfully healthy, but in hot, humid Florida, where we live, not many folks will choose that option (nor will many in very cold areas, or very hilly areas).

What about electric vehicles?  As an aside – the electric vehicle is touted as a solution that can reduce our reliance on fossil fuels.  However, as interesting as the technology is, plugging into the current grid does not solve the problem.  In my area, 23% of electric power comes from coal, 61% from natural gas, 13% from nuclear, and about 2.3% from renewables (primarily solar) (http://floridaenergy.ufl.edu/florida-energy-facts/).  Hence, the electric vehicle pulls its energy from non-renewable sources, just as gas-powered vehicles do.

The Future.  I believe the future lies with Uber/Lyft driverless cars, when cars become a service, rather than a possession; when each car can be used more than 10% of the time,

reducing the need for numbers of cars and parking spaces; when commuters can get two hours of extra work or relaxation instead of rush hour stress; when older folks (like me in the not-too-distant future!) will relish still being able to get around easily after being unable to drive.  Is it a perfect solution – No, but it should reduce the number of cars.  I am equally interested in reducing our reliance on gasoline, given its issues with price volatility and environmental impact.  Compressed natural gas (CNG) is saving some companies a small fortune, with significant reductions in Greenhouse Gasses (GHG), but the infrastructure needs to be scaled up.  Perhaps hydrogen fuel-driven cars may prove another useful technology to explore.  Ultimately, a better solution may be the virtual workplace and the traditional, small-town community.  Doesn’t that sound nice?  All of these technologies are within our reach … maybe within the next ten years. Let’s see what happens.

In the meantime, let’s be smart about selecting the most cost-effective, fuel-efficient, spiffy car we can.  We can love the earth and love our pocketbook.  The more the demand grows, the better the options will become.