Where’s the beef? Yes, Virginia, there is such a thing as 3D printed beef!!

Home/Common Ground, Eco-friendly food, Featured, Food/Where’s the beef? Yes, Virginia, there is such a thing as 3D printed beef!!

Where’s the beef? Yes, Virginia, there is such a thing as 3D printed beef!!

The UK Daily Mail is reporting, “World’s first 3D bioprinted RIBEYE STEAK that’s ‘just as tender and juicy as the one you’d buy from a butcher’ is unveiled.” The Washington Post and others also had the story. This is fascinating. It’s real meat – without having to slaughter any animals; without even having to grow the animals!  Think about that: no scary slaughterhouses (even the most humane ones designed by Temple Grandin); no added methane from cow’s digestion. 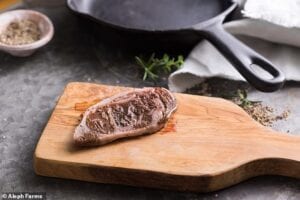 How can this be? Well, there is a new and exciting product that has just been developed by an Israeli company, Aleph Farms Meat Growers.  They use cow cells (taken from a non-slaughtered cow) in a 3D printer to produce something that looks exactly like a sirloin steak.  I can’t speak to how it tastes, but I eagerly await the opportunity to try it!

Environmentalists have been extremely concerned about the methane from cattle contributing to climate change.  AOC said, “It’s not to say we’re going to force everybody to go vegan or anything crazy like that. But it’s to say, listen, we’ve got to address factory farming. Maybe we shouldn’t be eating a hamburger for breakfast, lunch and dinner. Like, let’s keep it real.”

The only solution prior to this was to switch to plant-based meat substitutes, like Burger King’s Impossible Burgers or the Beyond Beef ground “beef” you can get in supermarkets.  I do enjoy the Burger King Impossible Burgers when we happen to drive through Burger King, but there isn’t much choice – they’re huge and have more calories than I care to eat at lunch. I just saw Impossible Burgers for sale on Amazon – for $6.50/burger or almost $20/lb!  The other plant-based beef I have bought in grocery stores – and I have tried every one – doesn’t quite cook up the same way as real beef.  Hamburgers were a little dry.  And, of course, there is no such thing as a plant-based steak.  My hubby (and most Americans) loves his beef – there is no way that he is going vegan with any plant-based substitute!

We Americans get criticized for our affluent lifestyle when the people in most other countries are lucky to have meat as a condiment in a big bowl of rice or noodles, and so we are badgered to reduce the amount of meat in our diets. Those concerned with the impact of cattle on the environment would strongly discourage other countries from adopting American dietary practices (i.e., adding more meat to their diets) – heaven forbid that people in other countries who are lifting themselves out of poverty be allowed to eat delicious steaks.  Michael Shellenberger, one of the most ardent environmentalists in America, said in Apocalypse Never, that “climate change policies were more likely to hurt food production and worsen rural poverty than [a 4-degree] climate change itself.” He quotes a climate scientist as saying, “We shouldn’t be forced to choose between growth and lifting people out of poverty and doing something for the climate.”

Now, there might be a solution that has the possibility of pleasing everyone.  Aleph Farms in Israel is a company focused on sustainability and elimination of animal cruelty – goals I would say have widespread appeal. Prominently on their home page is their mission statement:  “We grow real, delicious steak directly from cow cells without harm to animals or the environment, so you can enjoy the steak you love knowing you’ve made a choice that’s better for you, and the planet.”  I love the connection their name, Aleph, makes to their product.  Aleph is the first letter of the first alphabet in the world and signifies to them a new beginning.  The pictograph for Aleph in the oldest alphabet was an ox, which they say is a symbol of strength – and, coincidentally, reflects the reality of their product: beef.

From Aleph Farms Meat Growers About Us page

3D beef is not available quite yet – it might be three years before it comes to market, and it will probably start out quite expensive until they can scale up production.  The sooner it gets here, though, the better.  I am looking forward to a kinder, gentler steak experience!